Sharp Shanked Hawk in my Yard Eating a Sparrow

I live in the Canadian Niagara Peninsula near a wooded area. There are many birds that come to my feeders.

Occasionally, I see small hawks hunting in the area and catching the odd bird.

I know the hawks are around when all the other little birds disappear and hide in the bushes.

We have both Sharp Shanked hawks and Coopers hawks. People around here call them Bush Hawks. They are almost impossible to distinguish. The Cooper hawk has a curvier tail while the Sharp shank hawk has a tail that is more straight across.

They are very fast and agile. They fly through the branches and go sideways very easily.

This hawk started coming around and I started finding little piles of feathers.

More of these photos are taken with a zoom and sometimes through a screened window. The hawks are very fast and they don't stay in one spot for very long.

The only time they seen to stay put for a short while is after feeding. They will go on a branch and groom. 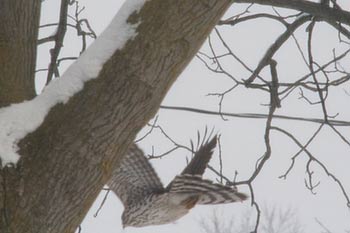 After a while this hawk flew off and quickly blended in the brown trees. Even when you know they are there, they are so well coloured that they are almost invisible.

I can't tell boys from girl hawks so I don't know what sex this one is. 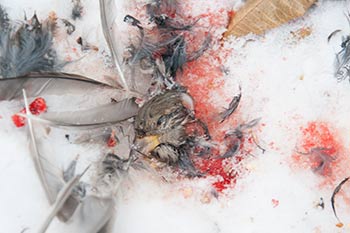 Shortly after seeing this hawk I found the remains of his meal. He had caught and eaten a sparrow.

There is not much left except the head and lots of feathers. 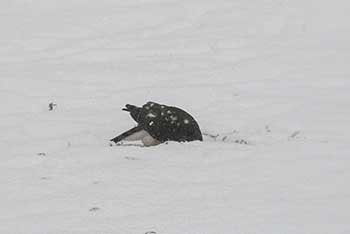 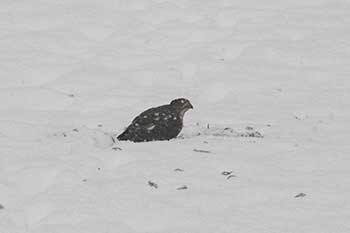 I few days later, I looked out the window and saw a hawk eating something.

He had just started and was still pulling feathers off his lunch. Earlier I had heard a thump so I guess he had caught a bird and crashed in the window as he pounced. It was not the first time this had happened. My bird feeders are quite close to the house and the hawk seems to come in and catch the birds against the house.

As I first looked there was not a bird in sight but soon enough, lots of birds came back to the feeder. I guess they know the hawk is busy, and no longer a threat. 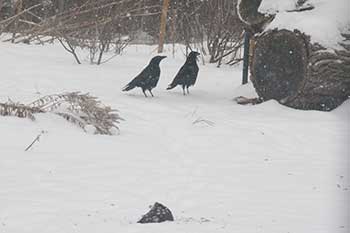 After about 10 minutes, 3 crows arrived. They are local crows and live in the area. They come to the back porch and get peanuts in the morning.

The dark coloured hawk in the white field stood out and I guess the crows came around to see if they could score some food. Two spent some time watching from about 15 feet away while a third stayed in the tree.

The hawk kept an eye on them but continued eating. 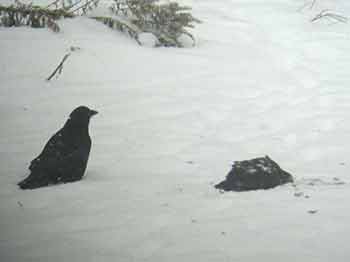 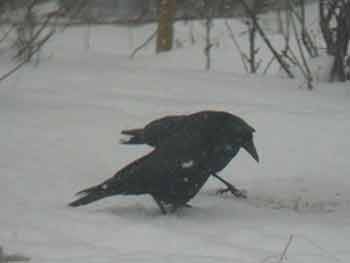 After a short while of watching and consulting together, one of the crows came quite near the hawk. At this point the hawk put his head down, stopped eating, and kept low. From where I was watching, it looked like he covered his meal with his wings, maybe to hide it? Soon the second crow also came near.

The crows are quite a lot larger than the hawk. They did nothing that looked aggressive, in my eyes, but watched and sort of loomed, fluffed up.

They looked like they wanted to bully the hawk away. They made no move to peck or attack the hawk. This lasted for about 5 minutes. 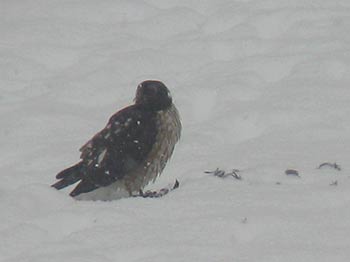 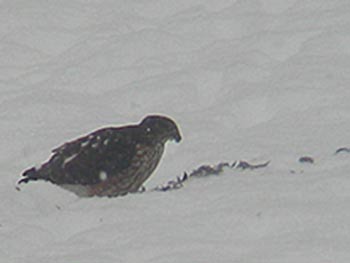 When they saw that they had not intimidated the hawk away, the 2 bully crows flew away. One made a pass over the hawk and deliberately touched it with it's wing as he was flying off. The little hawk stood its ground and soon the crows were gone.

The hawk finished its meal after checking carefully around, and when there was nothing left, went to the trees and groomed for a while.

After he'd gone I went to check the remains and only found a pile of feathers and a upper skull with a starling beak.

It was very windy and there was a lot of snow coming down. 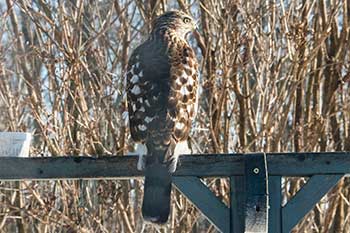 I saw him again a few days later. He was sitting on the bird feeder looking around.

There wasn't a peep from the little birds and after a while he flew off.

Since then I have regularly found either blood on the snow, or circles of feathers. He seems to catch mainly starlings and the odd sparrow. Maybe because There are a lot more of them than anything else.

Raptors of Eastern North America: A Comprehensive Guide to All Species