I discover a new Bug

When I moved from Toronto to a little spot near Lake Erie I moved into a very different world. Although the distance as the crow flies is not very far, it is considerably warmer and I'm running across creatures I had rarely or never seen before.

One of these was the hummingbird moth. One evening we were quietly eating supper on the deck when something came and started hovering around some of the flowers. It was several months later before I was lucky enough to phototograph them. 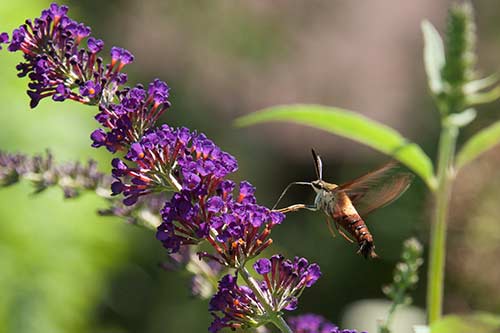 He's about an inch long from head to end of the back hairs, slightly longer if you count the antenna.

He's (or she?) has got a long feeding-tube-tongue-proboscis uncurled into a butterfly bush flower. This plant attacts a stunning collection of butterflies, bees and other insects.

In the photo the wings are visible but blurred. In real life he moves his wings so fast they are invisible.

He makes a humming sound as he flies though. 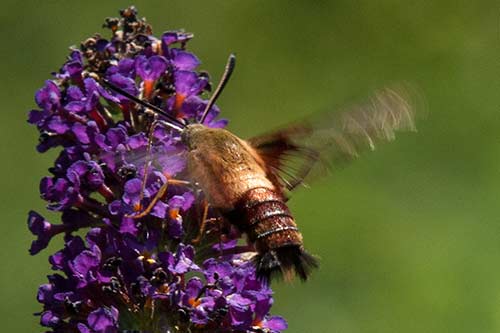 The clearwing moth as they are also called plump and seem covered with brown fur including what looks like a tail. This "tail" can be sort of fanned out to help in flying.

There are several species of hummingbird moths (genus Hemaris) which range from yellow to brown. Mine are a gorgeous brown with various golden highlights and black hairs. 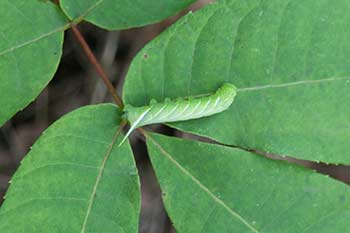 They are members of the same family as sphinx moths and like them their caterpillar is green with a horn like projection.

This caterpillar is of the sphinx family. I don't know if he's a hummingbird moth larva but would look very similar. I'm not very good at identifying caterpillars.

The wings of the hummingbird moth have browny-black patterns with clear areas in between.

Like hummingbirds they can just hover and back up or go up and down.

I have only seen them during the day. I don't think they are active at night. Late afternoon or early evening, after the heat of the day was a common time for a visit by them.

They don't seem to be fussy about their nectar source and I've seen them on Liatris as well as my bee balm and on the milkweed. Apparently they like phlox, honeysuckle and verbena as well.

I have 2 butterfly bushes and they flower from early summer to frost. There is no single plant except the milkweed flower, which only flowers for a few weeks in summer, that attracts more butterflies. If you plant some, locate them in areas where you can control them. They can be invasive in warmer areas. In northern areas they are not. Here is a supplier Proven Winners InSpired Violet Butterfly Bush (Buddleia) Live Shrub, Purple Flowers, 4.5 in. Quart 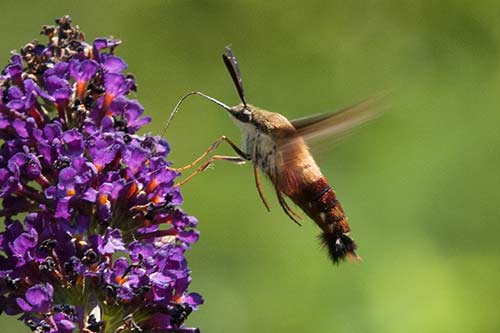 They lay their eggs on honeysuckle, dogbane and some rose families such as cherries, plums and hawthorn.

In this area, southern Canada, there is only one generation per season but further south there can be 2. Here the moth spins a cocoon and pupates in leaf litter. It comes out in the spring.

Hummingbird moth are also found in other parts of the world. In the UK they are called Bee Hawk-Moths.

Here is a page on the Hummingbird Moth from the Massachusetts Audubon Society.

Really good article on growing milkweed by Our Habitat Garden. Not only do monarch butterflies love milkweed but honey bees, many butterflies and the hummingbird moth can't get enough.

email me if you find mistakes, I'll fix them and we'll all benefit: Christine
I raised some gorgeous Black Swallowtail Butterflies from Eggs I found in my garden
Visiting the Niagara Falls Butterfly Conservatory.


I have the caterpillars of Eastern North America book and I'm always going to it to figure out who becomes what.