The first time I used a knife to push peanut butter down the hole but it took a long time. I needed a better solution to easily reach the bottom. 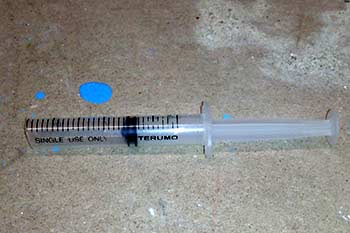 I cut the end off a plastic syringe and plunged it into the peanut butter. It filled but came out completely covered in peanut butter. I had to wipe this off. Another problem was that the syringe only held enough to fill one hole. I needed another idea to fill my peanut butter feeder.

Back to the drawing board. I trotted myself off to the cake decorating place thinking that I could use a decorating pastry bag with a plain nib to squeeze the butter into the hole. I found that the bags were quiate small and not very robust and not up to handling lots of peanut butter. The nibs were also too short to reach down very far. The pastry bag idea is also used by construction maintenance guys to squeeze mortar between bricks where it has fallen out. I could not find one in my little town. Amazon has them, they are called grout bags. Bon 21-167 Grout Bag Super-Flex Silicone Tip

How I solved the problem 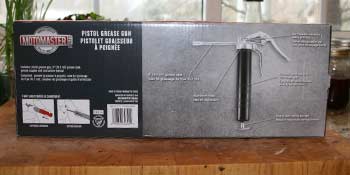 I used a grease gun! Walking through Canadian Tire I noticed their grease guns and in particular one house brand that was on sale. After a quick lesson on how to fill it by dipping it in grease and releasing a spring loaded piston, off I went home to try it out.

Note that this grease gun only comes with a pipe nozzle which is perfect for my use. Most come with a flexible hose. If you are ever planning to use the grease gun as a grease gun and not just as a peanut butter filler, then you might want to buy a hosed one to get in more difficult spots. I have another small gun so I did not care. 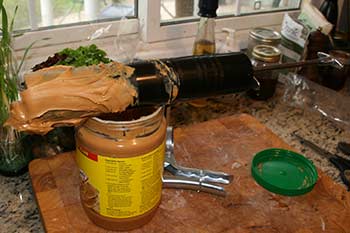 NOTE, USE ONLY SMOOTH PEANUT BUTTER IN THE GREASE GUN. IT CAN'T HANDLE LUMPS. Also don't use the kind that separates into a hard sludge and oil on top. It's better peanut butter for humans, but it does not go through a grease gun and will jam it.

I pulled the grease gun out of the jar and had to use a spatula to clean it up but the reservoir is large so I'll be able to fill my Super Squirrel Proof Peanut Butter Feeder several times before refilling the large reservoir! 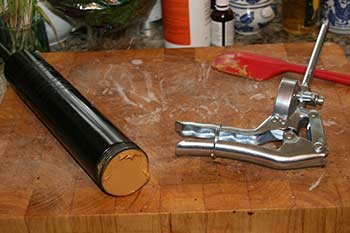 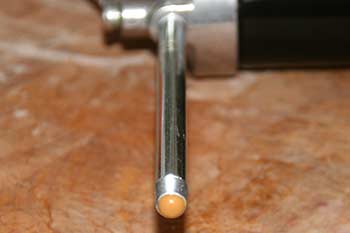 The top part of the gun has a trigger and you can pump the handle to get peanut butter to come out. I removed a small fitting at the end of the gun nozzle. This is what fits onto the grease nipple. It just screwed off leaving an open tube that is perfect to fill the feeder.

The top of the reservoir is threaded and the pump handle assembly just screws onto it.

These grease guns can produce a tremendous amount of pressure and it was easy to push peanut butter out of the nozzle. SUCCESS!! It is not tremendously fast but fast enough to fill a bird feeder. 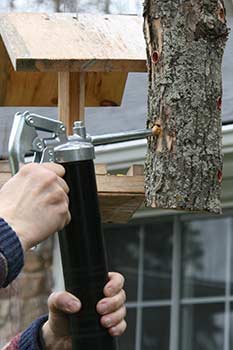 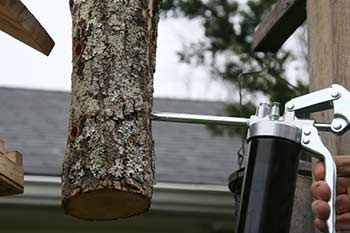 The re purposed SQUIRREL PROOF Peanut Butter Feeder Filler is working perfectly. It's a simple matter of the putting the nozzle in the hole and squeezing the handle.

I found the gun full of peanut butter was a bit heavy to hold over my head so I took the feeder down and worked on a lower surface. It was fast and easy. A quick clean of the nozzle and the gun is ready to put away till I need to fill the feeder again. Since peanut butter is very oily it will not be corrosive and damage the grease gun. I'm keeping it with the bird seed. I expect I will be able to fill the feeder 3 or 4 times at least before needing to refill the reservoir.

These guns are designed for grease which is smooth. Don't use crunchy peanut butter with a grease gun. It probably will damage it.

How is the SQUIRREL PROOF Peanut Butter Feeder working? 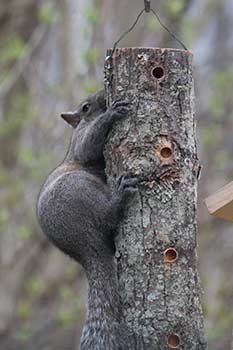 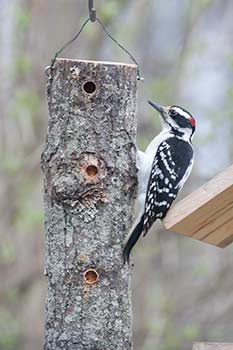 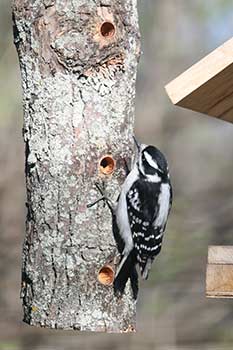 After refilling the feeder, the squirrels came and got a lick from each of the holes but not enough to warrant staying. By sticking their chin in the feeder they can get down about a quarter of an inch. I had filled to the top but I could leave more of a gap that would prevent the squirrels from reaching the peanut butter completely. After they have a lick they then go away and the birds get a chance at the feeder.

So far I've had Hairy and Downy woodpeckers, several chickadees, a nuthatch, a red bellied woodpecker and a sparrow. Probably more came but I did not watch all day. The birds are not having to run away from the greedy squirrels after the fist few minutes after filling.

The hordes of starlings have not descended on the feeder like they did for the larger holed ones. I'm not holding up much hope that they won't figure it out though. They are clever.

With tools you get what you pay for. Since I am not asking the gun to do very much I think a cheap one will work well. Time will tell.
Here is a link to instructions on How to use a grease gun. Here's a better gun.